Hello, anglers! If you are like us, you probably have a favorite fish. Ours is the El Dorado fish, or you might know it as the dolphin instead. It is often simply called Mahi Mahi too. We can’t seem to get enough of fishing for this one, and here are a few things about the El Dorado that make it so appealing to us.

All About the El Dorado Fish 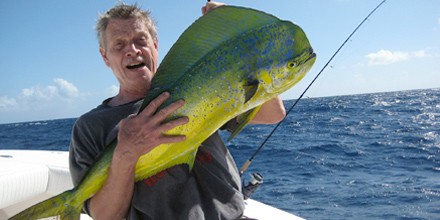 The dolphin is one heck of an aggressive fish! Once you have him hooked, keep him in the water behind your boat, and you’ll note that other fish come up to the boat to see what all of the commotion is about. You’ll be able to attract multiple fish this way.

Plus, the dolphin will take a bunch of different offerings, from flying fish to squid, jigs, or flies. While they’re hard fighters when you hook them, at least they respond to a lot of different gear.

Delicious! Mahi Mahi is in high demand in restaurants and for good reason. This particular fish is one of the tastiest in the entire ocean. Plus, you can use so many methods to cook it including the oven, BBQ or grill.

Check out the colors on the El Dorado! The spectrum of colors is incredible. When they’re in the ocean, you’ll find they are bright blue, purple, and silver.

Get them into your boat and watch their more familiar colors come to light; they become a more familiar yellow or green, with accents of blue, purple, and silver. The male has a flat squared-off head, and the female has a head that is round instead.

If you go into a restaurant in the Keys, you’re likely to find at least one taxidermy dorado on the wall. It not only looks beautiful when wall mounted, but it is also symbolic of offshore, blue water fishing.

The term “by catch” refers to the species you catch while fishing for something else. So, while you fish for dolphin, you might catch a range of tuna species or a marlin. Talk about a great bonus!