For those who love deep sea fishing, few things are more thrilling than landing a sailfish. These beasts can be close to 11 feet long, weigh over 200 pounds and put up a fight. But what’s the best way to find and catch them? 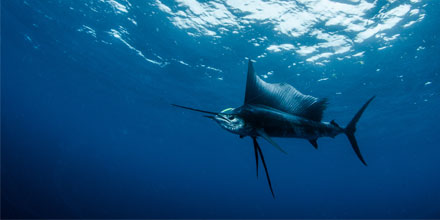 The sailfish is a type of billfish and belongs to the family Istiophoridae. It is different from the swordfish in that it has teeth, rod-like pelvic fins and scales. The dorsal fin is notable for its size and is diagnostic. Its longest ray is 150 percent longer than the depth of the fish’s body. The fin can disappear into a groove in the fish’s back.

The sailfish’s body is long, tapering and compressed. The top is dark blue, the bottom is silvery and adults have vertical rows of golden spots along their sides. The snout, like the snout of other billfish like the marlin, has been elongated into a sword. Interestingly, this big and powerful animal doesn’t live long. It achieves most of its growth during its first two or three years of life then dies when it’s only four or five.

How to Catch Sailfish

The best way to catch sailfish is to troll at or close to the surface of the sea. This means that the bait is pulled along behind the boat to attract the fish. For a fish the size of a sailfish, the boat usually uses four rods at a time, two on the stern and two on on each side. They use a combination of submerged and skipping lures that tricks the fish into thinking it’s chasing a school of prey.

The best tackle to use when fishing for sailfish is an 80 to 130 pound boat rod. The rod needs to be both powerful and flexible, for it not only has to cope with a very large fish but with the challenges of deep sea fishing such as sand, salt and rough seas that knock it around. The rod is best used with an 80 to 130 class lever drag or a 12.0 or 4.0 star drag. The best line to use is 20 to 130 pound nylon with a leader made of heavy wire or nylon. The best hooks are 8/0 to 14/0 and should be flat forged. A great variety of bait can attract a sailfish, including mullet, squid, herring and other live or dead fish. They are also attracted to plastic squid and Kona heads.

If the fisherman opts to fly fish, they should use a heavy fly rod with a saltwater fly reel. The best line is a #10 line with a 20 pound leader and a streamer fly. The best hooks are 2/0 or 5/0.

The fish must be handled with care when it is brought onto the boat because of its sword, which is not only sharp but abrasive. Good, heavy neoprene gloves are recommended.