How to Fillet Red Snapper

Along with it’s bright pink color, the red snapper has an appealing taste and texture. It has a mild flavor that you can enhance by frying or baking it. But first you have to fillet the red snapper. Here are the instructions:

How to Fillet Red Snapper 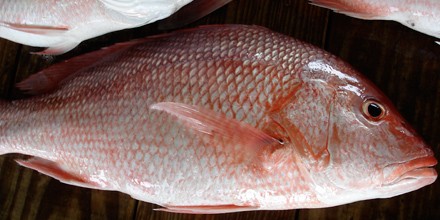 Before filleting the fish, you will want to scale it. Next, rinse the snapper under running water and pat it dry. Put it down on your cutting board with its back facing you.

First, insert a knife just above the backbone near the head. Use only a sharp knife, such as a fillet knife or chef’s knife.

Make a cut from the head to the belly, taking care only to cut through the top fillet and slightly behind the gill cover. Be sure to include the meaty section at the top of it’s head.

For your second cut, turn your knife about 90 degrees and take just as much care as you move the knife along the length of the red snapper. Your goal with this cut is to separate the fillet from the backbone. As you cut, press firmly down on the fish to keep it from sliding around.

Finish removing your fillet with a third cut. You will want to cut down through the skin at the tail.

Next, repeat those three cuts on the other side of the red snapper. Once you have done this part, remove the belly flap by cutting just under the rib bones to the fillet’s bottom, at a 45-degree angle. The belly is thin on a red snapper in comparison to tuna, for example.

Lastly, check for pin bones. These fine bones run along the fillet’s mid-line and are difficult to see. With your fingers, feel along the fillet to locate each bone and pluck them out with a pair of fish pliers or needle-nose pliers. Clean the pliers before using them. Pull each bone in the direction in which it points.

How to Fillet Red Snapper Videos