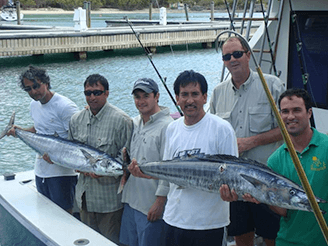 Wahoo are one of the most sought after and prized game fish in sport fishing.  A prized catch due to their blistering speed, fighting qualities and excellent flavor. Supposedly, Wahoo got their name both as an exclamation, and also because of how fast they take off on a line. You will know it is a wahoo just by how loud your reel will begin to scream! Wahoo are among the fastest pelagic species known to man, reaching speeds upwards of 60 mph. They are found near the surface in tropical and subtropical waters around the world. While the Wahoo live in tropical waters year-round, they can also be found in higher latitudes during the summer months. They are frequently found alone or in small, loosely connected groups rather than compact schools. They are often found near banks, pinnacles and natural drifting matter in the ocean, especially near Sargassum, a floating brown macroalgae (seaweed) found in the Atlantic.

How to Catch Wahoo

There is a ton of different ways to catch these fish, but the most preferred method when fishing for wahoo in specific, is trolling: a method of fishing where one or more fishing lines, baited with lures or baitfish, are drawn through the water behind a boat. The speeds in which you choose to troll really depend on water conditions, and personal preferences. Some fisherman will opt to go as fast as 22 knots, either dragging lures, or dead bait. The best speed however, is anywhere between 12 and 16 knots, dragging either lures, live, or dead bait. Captain Kevin Pagan, a renowned Wahoo fisherman based in Miami, FL has gotten his technique down to a science. Pagan fishes a six-lure line spread, setting them out 150, 250 and 350 feet apart on the left side of his boat, and 200, 300 and 450 feet on the right side he claims. Pagan will make abrupt 15-degree turns along his course to slide up and down the drop-off, staying between 120 and 350 feet of water. Pagan uses 100-pound monofilament line on 50-wide reels with drags set to 30 pounds. His lures are rigged on four feet of No. 19 piano wire attached to a 25-foot 400-pound monofilament shock cord. A cabled trolling lead links the shock cord to his main line — ­generally 48-ounce leads on the shorts, 32-ounce leads on the mids, a 24-ounce lead on the 350-foot line and a 16-ounce lead on the 450-footer. Significant tackle for an admirable opponent, as Wahoo have extremely sharp, serrated teeth that are designed to slice their prey into bite sized morsels. Anything less dense than a piano wire and the wahoo will snip your line in a heart beat.

There are a few more methods that do work. When you set out for mahi-mahi, and are seeing a lot of bait and the waters are just teeming with life, try jigging: the practice of fishing with a jig, a type of fishing lure. A jig consists of a lead sinker with a hook molded into it and usually covered by a soft body to attract fish. Jigs are intended to create a jerky, vertical motion, as opposed to spinnerbaits which move through the water horizontally. Drop your line down as far as you can, some go as far down as 500 feet. Then reel in as fast as you can! The bite will come either on the descent, or the retrieve. Then there is chumming, or “chunking” as some may call it. Basically when you just pour a bunch of fish guts and blood behind your boat to attract game. When doing this, wahoo practically come up right behind your boat, in which case, throw a line in the water and enjoy the fight! Get a good nights rest, because your arms are going to be falling off you afterwards!