Fishing and kayaking don’t have to be two separate activities. In fact, people have been fishing from kayaks for thousands of years. Here’s how to fish from a kayak, in case it’s on your bucket list. 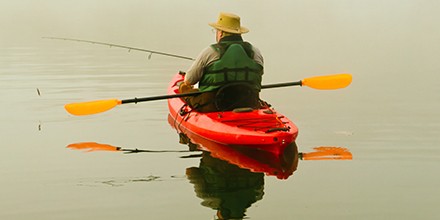 The fishing can be done from any kayak, although thinner varieties tend to work best. They feel as though you are fishing from a canoe. Many people swear by the sit-on type of kayak for its stable base from which to put the lure to water. Some even have fishing apparatuses mounted on them for convenience. A wider kayak is usable too.

The ability of the paddler to steady the kayak is paramount to why this boat works great for fishing. Simply use your hands to cast, retrieve and catch or throw back the fish, rather than paddling. But there’s more to it than that.

Part of how to fish from a kayak involves changing slightly your fishing tactic used on land. After all, your elbows are only slightly above the water when you’re in a kayak. One common problem amongst kayak fishermen and women is hooking a lure or fly onto the canoe. Its removal can be difficult so you may have to head back to land first or ask another paddler for help dislodging it instead.

This brings us to the next issue, which is the length of the fishing rod. Although a short rod is easy to control, it won’t enable you to get a bigger catch. Instead, most people learn how to fish from a kayak by using a rod tip that can swing full circle you. Otherwise, if the fish cuts sharply to the right under your cockpit, it will take the rod with it. The solution is to winch a total circle your kayak. Doing so enables you to stay in control of your catch, regardless of which direction it goes.

Fishing in a Limited Space

It goes without saying that you have little space for tackle storage in a kayak. This means you cannot take out a combination of choices and create a wicked combination on the spot the way that you might in a larger boat. Instead, prepare your lures ahead of time.

Another challenge is what to do once you’ve caught the fish. You have to keep the rod tip quite high as you bring the fish over the side. Many people who learn how to fish from a kayak use a landing net. Others use a stringer without the landing net. Once it is caught, lay the catch across the aft deck and paddle back to shore with pride.